Perhaps one of the most interesting insights into the human genome is that despite the seemingly large variation in phenotypes and disease susceptibility, the amount of genetic variation between any two individuals is only about 0.1%.

Genetic variation is a broad term that includes differences as small as a single base pair to alterations in the number or structure of entire chromosomes. Structural variation (SV) is a subset of genetic variation that includes both microscopically visible and submicroscopic variants. Earlier definitions of SV only included variants above 1 kb in size, but most recent definitions include variants 50 bp or greater.

Common examples of SV are comprised of balanced forms, including inversions and translocations, where the same amount of genetic material remains however in the case of inversions the variant is in reverse orientation and in translocations the variant is in a different location. In unbalanced forms, including small deletions and duplications (indels), large-scale copy number variants (CNV), and insertions the amount of genetic material has increased or decreased depending on the type.

Larger structural changes had been studied for decades using traditional cytogenetic methods but due to technological limitations it was thought their incidence was low and their role was perceived as being somewhat esoteric. With the advent of next-generation sequencing (NGS) is was possible to study the genome at the base pair level. Earlier NGS studies on genetic variation were focused on panels of single base pair changes, mainly because they were easier to detect, and it was thought these single base pair changes were the primary drivers of genotypic and phenotypic changes. But later studies found that not only was SV responsible for the majority of overall genetic variation, SV is the primary driver in phenotypic differences and disease susceptibility.

Much research is now being done on SV so that we may develop better diagnostic tests and ultimately identify therapeutic targets. In addition to sequence-based approaches, technologies like whole genome mapping and advanced cloud-based analysis tools are being used to further our understanding of SV and its role in disease. 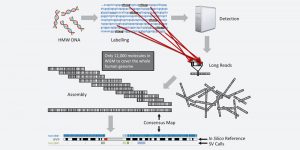